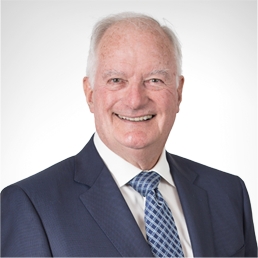 Delivering excellent client service has been my unwavering objective throughout my career. Clients deserve that.

Bold. Innovative. Empowering. These are just some of the words used to describe Doug during his long and distinguished career. Over four decades, Doug has developed a stellar reputation among colleagues and clients alike. He recognizes that tax laws are continually evolving and thrives on the challenge of solving new problems.

Doug grew up in Toronto and played a wide variety of sports, including hockey. His team’s standout goalie was Ken Dryden, who went on to win six Stanley Cups with the Montreal Canadiens. Doug quickly learned the value of being part of a talented team.

Doug inherited his interest in income tax from his father, who was head of tax at Imperial Oil. When Doug enrolled at Osgoode Hall Law School, he loaded up on tax courses and his future was set. He felt incredibly fortunate to have Arthur Scace – a celebrated authority on income tax – as one of his professors. Scace recognized Doug’s potential, and hired him on at his law firm McCarthy and McCarthy in Toronto (later renamed McCarthy Tétrault), following graduation. Doug always remembers his mentor’s advice – “Do excellent work and establish a strong reputation.” It wasn’t long before Doug was establishing his reputation in the field of tax law.

After venturing west to Calgary with McCarthy and McCarthy to work on numerous oil and gas transactions in the late 1970s, Doug and two fellow partners set up the firm’s first office outside of Ontario. It wasn’t long before he established himself as a leader in the Canadian tax community. In 2013, Doug joined PwC Law LLP to establish its Calgary office and practised tax law there as Counsel.

In his spare time, Doug enjoys spending time with his wife, Janet, and his extended family, which includes four children, their spouses, and ten grandchildren.