In our last two blogs on subsection 55(2), we provided our reasons for disagreeing with to the CRA’s position regarding the application of subsection 55(2) to a transaction completed solely for purpose of creditor-proofing and a case study of what we believe is an acceptable creditor-proofing transaction. In this blog, we will discuss another recent example of the CRA announcing its willingness to apply the GAAR to taxpayers relying on paragraph 55(3)(a) outside of a narrow scope of circumstances.

In recent CRA technical interpretations 2020-0860991C6 and 2020-0861031C6, the CRA raised the lack of “alignment” between outside and inside basis on a standard subsection 55(3) spin-out transaction as a GAAR-able issue. Such types of transactions are often referred to as “related party butterflies”, and are often implemented for mundane reorganization and creditor-proofing purposes. While there may be some sound policy rationale why this misalignment between outside and inside basis could be viewed as inappropriate, using the GAAR to police this appears to us to be an over-reach by the CRA.

To begin this discussion, we will start with a brief overview of the paragraph 55(3)(a) exception and how it is typically used in a 55(3)(a) spin-out transaction.

Very generally speaking, the five triggering events that will preclude paragraph 55(3)(a) from applying are:

An internal reorganization that does not involve any unrelated persons as part of the series of transactions should generally not trip into any of these triggering events. If so, paragraph 55(3)(a) prevents subsection 55(2) from recharacterizing the deemed dividends that are otherwise tax-free, due to offsetting dividend deductions in subsection 112(1), as a capital gain.

We will use an example to illustrate a typical spin-out reorganization that relies on paragraph 55(3)(a). Here is the opening structure: 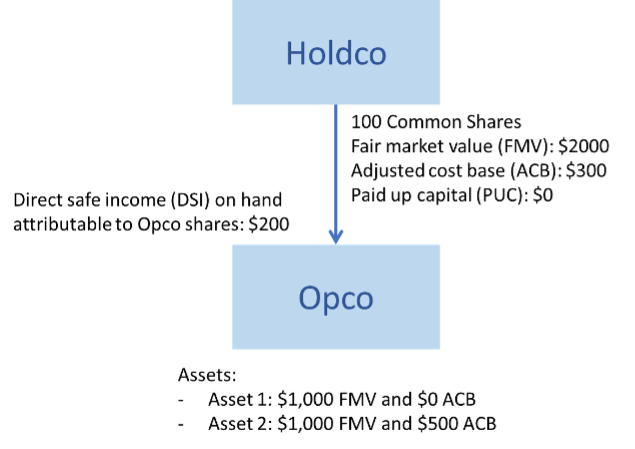 Holdco and Opco wish to move Asset 2 into Newco, a wholly-owned subsidiary of Holdco, on a completely tax-deferred basis. To accomplish this, the parties can carry out a cross share redemption spin-out plan as follows:

Within this series of transactions, two separate dividend events are deemed to have occured:

At the CRA Roundtable at the Canadian Tax Foundation 2020 conference (technical interpretations 2020-0860991C6 and 2020-0861031C6), the CRA expressed its concern over the ending structure described above. The essence of this concern is a misalignment of outside ACB of (i.e. ACB in the shares of Opco and Newco held by Holdco) and inside ACB (i.e. the ACB in the assets held by Opco and Newco), which could potentially result in more ACB in the hands of Holdco than would have been possible without this series of transactions. Here is how this increase in ACB could happen.

Continuing from the series of transactions above, consider the result if Newco were to distribute Asset 2 to Holdco as part of a winding up of Newco under subsection 88(1). 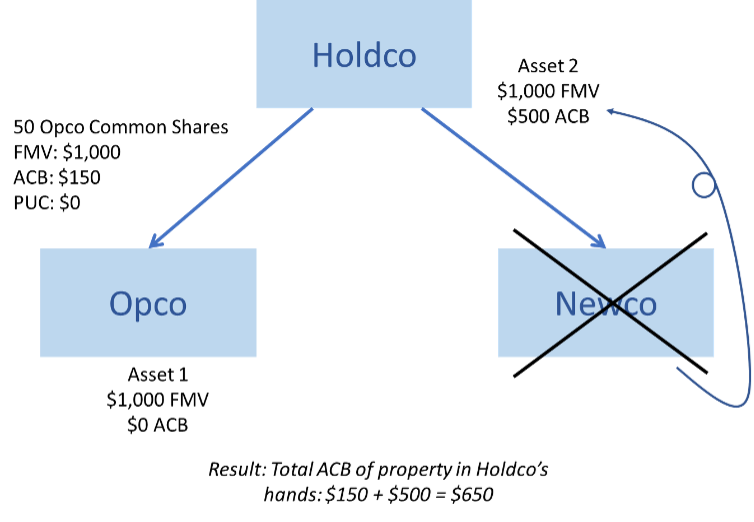 Let’s compare the maximum ACB possible in Holdco’s hands without the series of spin-out transactions. This was the status-quo structure: 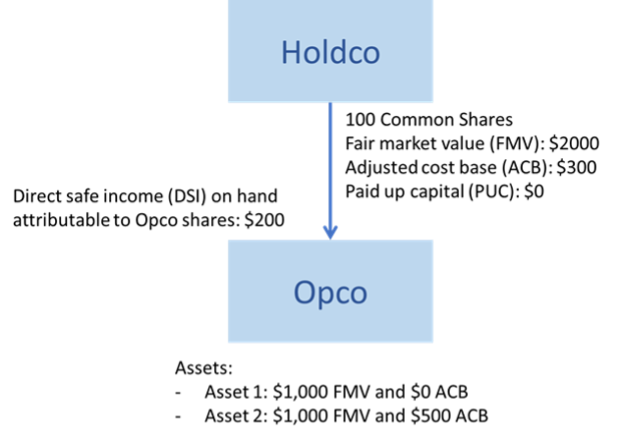 Opco could capitalize its safe income of $200 by increasing the stated capital and ACB of its 100 Common Shares. This would cause a subsection 84(1) deemed dividend to Holdco. Because $200 does not exceed the SIOH attributable to the 100 Common Shares, the safe income exception in paragraph 55(2.1)(c) should prevent subsection 55(2) from applying to the $200 dividend. As a result, Holdco shelters the $200 dividend amount with a deduction under subsection 112(1) and the ACB (and PUC) of the Opco shares increase from $300 to $500.

This $500 was the maximum ACB that could have been in Holdco’s hands based on the status quo structure. In contrast, the spin-out transaction implemented above along with the subsequent winding-up of Newco would result in Holdco having total $650 of ACB in its property. In the CRA’s view, the spin-out transaction, which relies on the paragraph 55(3)(a) exception caused an increase in ACB in the hands of Holdco. The CRA discussed these type of transactions in 2020-0860991C6 and 2020-0861031C6 and stated that they “would not be acceptable” and the CRA may apply the GAAR. It appears that the GAAR would be invoked only in the event of a winding-up (or vertical amalgamation) of Newco, but this is not entirely clear from those CRA documents.

According to the CRA, the appropriate way to implement the spin-out transaction is for Holdco to transfer enough ACB in the shares of Opco to Newco to cover the ACB (and any safe income that can be crystallized into ACB) of the assets to be transferred to Newco.  Assuming the CRA is correct in its view, then even if the GAAR does not apply until a future winding up of Newco, this misalignment issue remains a ticking timebomb if Newco is ever wound-up in the future.

Furthermore, the CRA gave guidance on how the SIOH of Opco prior to the spin-out is to be allocated between Opco shares and Newco shares immediately afterwards:

Based on the CRA’s guidance, it appears that the ending structure post spin-out needs to look something like this: 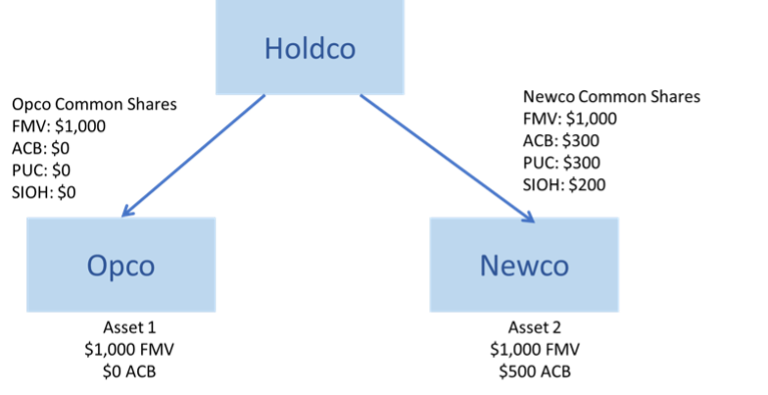 The SIOH attributable to Opco shares was originally $200 prior to the transaction. The CRA’s guidance is to allocate the SIOH between Opco shares and Newco shares based on the proportion of cost amount of property retained by the transferor or transferred to the transferee. In this case, 100% of the ACB previously in Opco’s hands is transferred to Newco, and therefore 100% of the SIOH should now be attributable to the shares of Newco.  This method of allocating SIOH appears sensible to us, as SIOH is normally associated with cost amounts inside the subsidiary: either as cash or other property.

Note that in the above ending structure the entire ACB of $300 at Holdco’s level is now capitalized in the Newco shares (rather than split between Newco shares and Opco shares). The CRA’s requirement is that Holdco transfer enough ACB in the shares of Opco to Newco to cover the ACB (and any safe income that can be crystallized into ACB) of the assets to be transferred to Newco.  The ACB of Asset 2 transferred to Newco is $500 and Newco safe income that can be crystallized into ACB is $200 – a strict adherence to this guidance would require Holdco’s shares in Newco to originally have $700 of ACB.  This is obviously impossible since Holdco is starting with an aggregate ACB of $300 and no gain is being triggered on the transactions (and as discussed above, even if Opco’s SIOH is crystallized, Holdco’s ACB in shares would at most be $500). We believe the transaction should still be acceptable under this guidance because it ensures that all of the $300 ACB are in the shares of Newco rather than in the shares of Opco, and that a subsequent winding-up of Newco should not create an undue increase in the ACB of Holdco’s properties – see below: 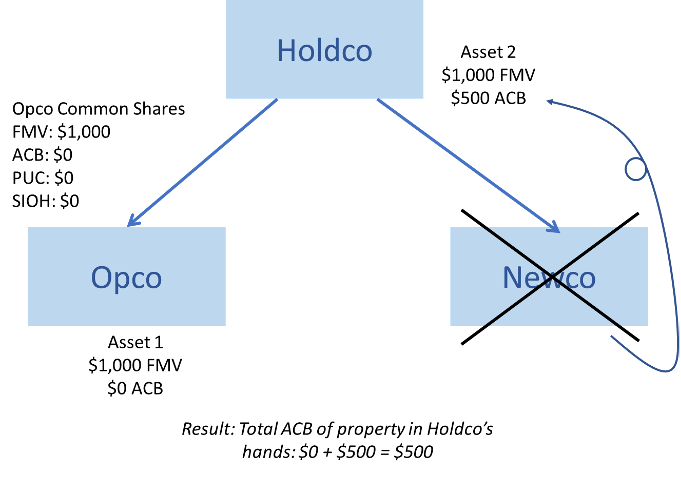 After a subsection 88(1) winding up of Newco, Holdco owns Asset 2 with $500 ACB and shares of Opco with $0 ACB. Opco also has no SIOH remaining to crystallize into additional ACB for the Opco shares. This $500 ending ACB in Holdco’s hands is equal to the ACB that would have been in Holdco’s hands under the status quo structure after a crystallization of the $200 SIOH by Opco. Therefore, the CRA should no longer be concerned.

So how to actually implement the steps to ensure the entire $300 of ACB goes over to the shares of Newco? There are probably many ways to structure that result. For example, as a preliminary step, Holdco can exchange, under subsection 85(1), Opco Common Shares for (i) Opco preferred shares redeemable for $1,000 with ACB of $300, and (ii) new Opco common shares worth $1,000 with ACB of $0. The Opco preferred shares can then be transferred to Newco under subsection 85(1) with Holdco taking back Newco shares with $300 of ACB and PUC. The rest of the steps would be identical, with those Opco preferred shares being used for the cross-redemption between Opco and Newco.

Note that in the CRA technical interpretation, they made the PUC of Newco shares to be $0. We saw no reason why Newco shares cannot have PUC of $300, equal to the elected amount on the subsection 85(1) transfer of Opco shares to Newco. We should also note here that the CRA TI 2020-0861031C6 contains additional SIOH allocation guidance on how indirect safe income (i.e. safe income consolidated from lower-tiered subsidiaries) could be impacted by a share reorganization, but that is beyond the scope of this blog.

Is CRA over-reaching on the scope of the GAAR?

We do follow the CRA’s logic on how a misalignment of outside ACB and inside ACB could potentially cause an undue increase in the total ACB in Holdco’s hands, and we are aware that a significant increase in the cost amount of properties of the dividend recipient is one of the purpose tests for a dividend to be subject to subsection 55(2). What we don’t necessarily agree with is the use of the GAAR to police subsection 55(3) in this manner.

For the GAAR to apply in the situation described above, it must be that an increase in cost amount in the dividend recipient’s hands is contrary to the object, spirit and purpose of subsection 55(3) [amongst other GAAR requirements]. We just do not see the courts agreeing with the CRA on this.  If the government is offended by paragraph 55(3)(a) transactions that have the effect of increasing ACB, they should amend the legislation to prevent this rather than use the GAAR to create tax rules that simply do not exist. Conventional wisdom suggests that ‘GAARable’ transactions typically are those where the taxpayer bends themselves out of shape to achieve some artificial tax result. Here, the reverse applies: the CRA would apply GAAR to a transaction if the taxpayer does not go out of its way to prevent the natural course of how the transaction would have unfolded (i.e. in our example, transferring half of the pre-existing Opco common shares to Newco to be cross-redeemed).

Secondly, we have seen many paragraph 55(3)(a) reorganizations in our practice, and we can truthfully say that an increase in ACB at the parent company’s level is not an objective for 99% of families and businesses doing such reorganizations. Designing a tax regime that may catch the 1% who are bad actors while handcuffing normal business transactions for the 99% is a significant reason why our tax system is so complicated today.